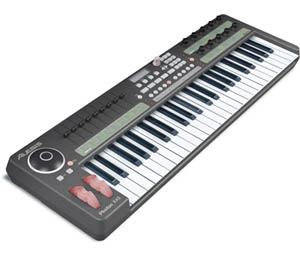 The new Photon X49’s revolutionary AXYZ controller dome facilitates control over software DAWs, plug-ins, and MIDI instruments in three dimensions with the wave of one’s hand. The Dome is particularly well suited, as an example, for creating filter effects. And with the Photon X49’s sixty assignable and immediately accessible knobs, buttons, and switches—including ten silky smooth, high resolution, 360-degree endless knobs, nine 60mm faders, and ten backlit buttons—users have a wealth of tactile control options when interfacing with their software. As expected, presets can then be stored for future recall. Add to this a 10-key keypad for direct access to software parameters along with dedicated transport controls for remotely controlling DAWs, and the Photon X49’s control capabilities are nothing short of extraordinary.

The Photon X49’s additional features include customizable template strips for software instruments and DAWs, as well as backlit Mod and Pitch wheels. Additionally, the Photon X49 ships with a copy of Steinberg’s Cubase LE software. The Photon X49 is USB bus powered, and can also be powered by four “C” cell batteries or with an optionally available external power adapter. The Photon X49 provides Plug and Play compatibility under both Windows XP and Mac OSX.

With a suggested retail price of $499 (euro 415), Alesis’ new Photon X49 USB/MIDI Keyboard Controller is the definitive solution for musicians and recording enthusiasts. The Photon X49 will be available Q3 of 2005.