M-Audio announced the availability of the new ProFire Lightbridge FireWire to Lightpipe audio interface. The device interfaces up to four Lightpipe devices with a PC or Mac via FireWire perfect for integrating digital mixers and/or ADATs with most popular DAW software. And M-Audio releases a new 4 x 4 USB audio interface built specifically for DJs and the included Torq DJ software, called Conective.

The ProFire Lightbridge interface is capable of 32 channels of Lightpipe I/O, S/PDIF I/O and two-channel analog output for a total of 34 x 36 concurrent channels at 44.1 or 48kHz sample rates. With Lightpipe running 16 channels in SMUX for 88.2 or 96kHz operation, the ProFire Lightbridge offers a total of 18 x 20 concurrent channels. Independent volume controls are provided for the ¼” balanced outputs and front panel ¼” headphone jack.

The ProFire Lightbridge can output word clock as a master, or slave to external sync on any input; MIDI I/O also accommodates MIDI Time Code and MIDI Machine Control. 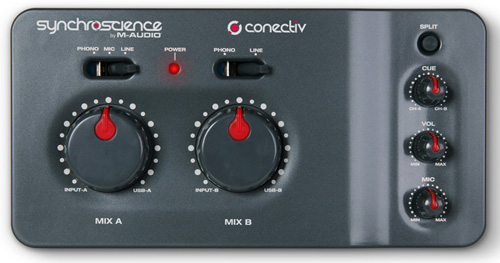