DiGiCo’s SD range of digital consoles continues to astonish and delight the professional audio industry. Visitors to ProLight+Sound 2011 will discover that the company has ‘done it again’ with the SD11 – a console that is the smallest (both in size and price) that the company has ever produced, but still packed full of DiGiCo’s famous industry leading features. The SD11 will be unveiled at DiGiCo’s stands 8.0 F60 and G56 and is designed to be equally at home as a desktop console or mounted in a 19” rack. By simply removing the end cheeks and arm rest, 19” rack fixings are revealed, making it straightforward to incorporate the SD11 into any touring or installation environment. 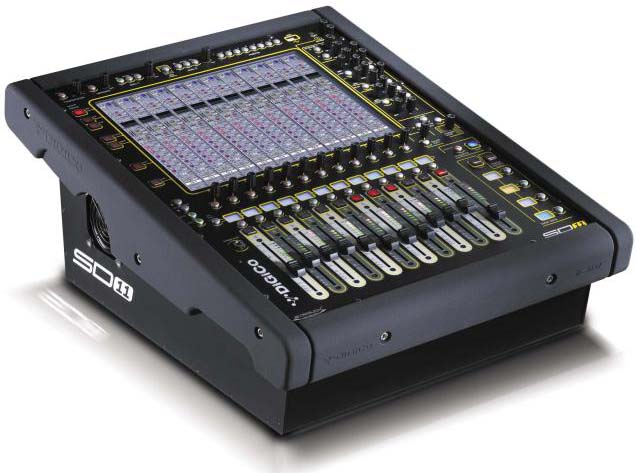 But that is just the first part of the SD11’s extraordinary specification. Never before has it been possible to manufacture a console at an astoundingly low price point and still maintain the very highest audio quality and best facilities. The SD11, however, achieves this feat with ease, perfectly demonstrating the versatility of DiGiCo’s Stealth Digital Processing ™ and the flexibility of a true FPGA-based digital audio console.

Manufactured with a steel chassis for strength and a polycarbonate-overlaid, aluminium work surface for reduced weight, the SD11 features 12 touch sensitive moving faders below a 15” touch sensitive screen. Such clarity of control means the SD11 is as simple to use at speed as any other DiGiCo console.

16 Microphone pre amps, eight line outputs and two mono AES I/O are provided, in addition to which users have the option to connect a DiGiCo D-Rack to the CAT5E port. This provides a remote I/O rack frame with an additional 32 Microphone inputs and up to 16 outputs.

Further connections are a MADI port, GPI/O, MIDI, Overview screen output, Word Clock I/O, an Ethernet port for console remote control / networking and a USB port for file exchange and session backup. The SD11 features 32 input channels with full processing, eight of which can be configured as full Flexi Channels. All inputs have dual mono inputs for fast ‘Main’ and ‘Alt’ channel switching, which are ideal for corporate events where a large number of spare microphones may be required.

Standard input channel processing includes channel delay; single and multi channel presets; HPF and LPF, with an industry leading 24db per octave; four bands of parametric EQ with band curve selection; compressor and gate; moveable insert point and access to all bussing. Standard output channel processing includes output delay; four bands of parametric EQ; filtering; compressor and gate; moveable insert point; groups with buss to buss routing; and Auxes that have direct talk to output with dim control for fast monitor communication. Dynamic EQ provides both expansion and compression on all four bands of the parametric EQ. These powerful processors can be assigned to any of the input or output channels, whether they are Mono, stereo or LCR and four units can be allocated as required. Multi-band compressors are also installed, giving the user extended dynamic control of any input or output channel. Again, four units can be positioned on either input or output channels.

One of the more unusual features for a digital console with the SD11’s small footprint is that it has 12 Flexi Busses, which can be user configured as either mono or stereo. In its maximum configuration these could be used as 12 stereo mixes –  equal to a remarkable 24 busses. As well as this already substantial bussing resource, an additional stereo or LCR Master buss and 8×8 output matrix is provided, facilitating the SD range’s renowned routing flexibility. Eight control groups (VCAs) are also provided for faster access to multiple channels and busses, user and snapshot configured for ultimate show control. Dual solo busses are also provided, making the SD11 well suited to managing Front of House and Monitoring tasks alike.

An unlimited amount of Snapshots can be saved and recalled, with user defined recall scopes being set globally, per snapshot or per channel function. Additional tools include feature-defined crossfade, sequence fire, MIDI control and a Snapshot notes panel.

In addition to the SD11’s core processing functions, insertable Stealth stereo FX and 12 graphic EQs can be routed, controlled and even snapshot recalled for the most complex show design. Four Stealth stereo FX units can be configured at any time from the palette of thirty-three effects. But this is not all, because even more processing is available through the SD series integration with Waves plugins. Unlike all other Sound Grid platforms, DiGiCo provides complete control of plugin parameters, as well as recall of snapshots and single loading and saving, directly from the console’s surface. Sixteen stereo Sound Grid racks can be inserted, with up to eight plugins in each rack.

Like all DiGiCo consoles, the SD11 software runs on a standard PC or Intel-based Macintosh for offline preparation and remote control of the console. One SD11 can also be linked to another, using a standard CAT5 crossover cable, providing 24 faders for control. In this configuration, the audio engine of the first SD11 provides complete redundancy for the other.

A final important facility is that advanced security options can be configured to protect console settings from accidental or unwanted change. These can also be password protected, making it possible to vary the amount of user parameter control. With all of this functionality in a rack mountable console, DiGiCo has proved that small is definitely beautiful – as well as highly versatile and budget-friendly. DiGiCo’s SD range of digital consoles continues to astonish and delight the professional audio industry. Visitors to ProLight+Sound 2011 will discover that the company has ‘done it again’ with the SD11 – a console that is the smallest (both in size and price) that the company has ever produced, but still packed full of DiGiCo’s famous industry leading features.