Building on the success of the highly acclaimed X-Desk, ‘X-Panda’ is a new small format analogue mixer aimed at project studio owners and it packs a versatile feature set into its compact frame. As a standalone product it serves as a high quality 24 input mixer that can be used for tracking (in conjunction with external mic pres) or master mix summing. In conjunction with an SSL X-Desk, X-Panda introduces 24 additional channels, which via the ‘X-Desk Link’ connection, feed directly into the X-Desk Master Buss, Cue and Aux Send/Return system. In conjunction with an X-Rack summing system fitted with a Master Module, X-Panda adds faders and additional inputs to create a versatile mixer. X-Panda can also be used with any other mixer to expand available channel count. 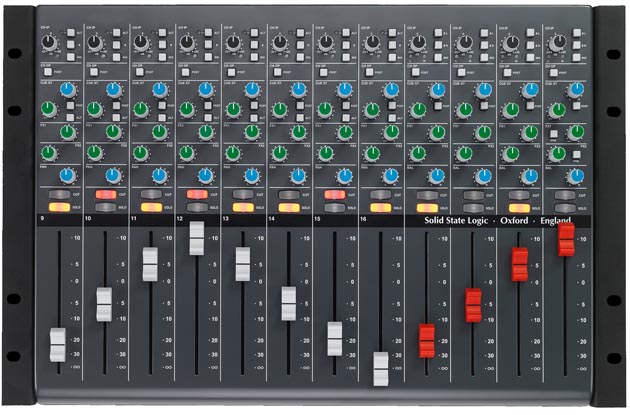 X-Panda provides 8 mono channels (each with Main and Alt inputs giving 16 mono inputs) and 4 stereo channels, giving a total of 24 channels at mix down. All channels feature an input Level Trim with a centre détente at Unity Gain, tri-colour signal indicator LEDs, Phase Invert, an Insert and a Direct Channel Output (which can be switched post fader). Each channel has a Stereo Cue section with dedicated Level and Pan controls. When tracking this is traditionally used to create a monitor feed to the Stereo Cue Buss Output but on mono channels Alt buttons flip the Stereo Cue section controls to adjusting the Alt input Level & Pan for mix down. Each channel features independent FX1 and FX2 send level controls (globally switched Pre/Post fader). Self illuminated heavy duty Solo and Cut buttons, Pan/Balance controls and precision 100mm faders complete the channel strip.

X-Panda features a stereo Mix Buss, Stereo Cue Buss and Solo Buss. When linked to an X-Desk using the ‘X-Desk Link’ connection, the X-Panda Mix Buss and Stereo Cue Buss feed into the respective Busses on the X-Desk. The Solo systems are also linked so that Soloing any channel mutes all other channels on all Linked units. Similarly when an X-Panda is Linked to an X-Desk with a Master Module fitted the Mix, Cue and Solo Busses are also Linked. It is possible to cascade up to 8 X-Desk and X-Panda units using the ‘X-Desk Link’ system, enabling very high channel count systems to be configured.

When used as a standalone product the X-Panda main Mix Buss and FX Busses are set to sum at unity gain enabling it to act as a summing mixer without the need for Master Level controls.