Scottish band, GlasVegas, is currently on a global tour with a compact Allen & Heath iLive digital mixing system managing its FOH audio. The band has already visited an assortment of venues across Europe and the USA, and is playing at many of the international summer festivals, including a headline spot on the John Peel stage at Glastonbury. 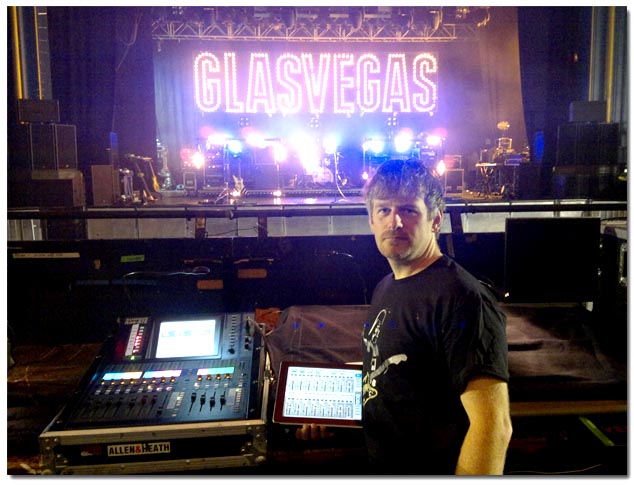 FOH engineer, Steve Pattison, has previously used various iLive systems for bands such as Alphabeat, Ellie Goulding and Royksopp, and for this tour, has opted for an iDR-48 MixRack with the rackmount iLive-R72, supplemented by the iLive MixPad app, providing remote and instant control of key faders.

“The R72 fits anywhere and I can carry it under my arm but that’s only part of the story,” Pattison explains. “To me, using only the basic functions of a desk is like having a gym membership and never going. There are a lot of tricks you can use to create a groove and a pulse. For instance, I am using a gate at 3dB across the bass, with a trigger placed on the kick drum so I get a 3dB boost when it is hit.

Pattison makes use of iLive’s numerous onboard FX for the drums, guitars and backing vocals to create the band’s signature “wall of sound”.

“I am using loads of reverb and the whole mix is quite ambient. The drummer plays standing up so I use the subharmonic synthesiser, which has a really nice LF tone, to get some good bottom end and a solid back beat for the song. I also have three guitar channels with FX: one is a pitch-shifted echo, a second with a panned delay, and the main guitar is set to jump to stereo so it punches through the middle. The FX returns are fully-featured so you can gate stuff and tweak channels as you wish,” he explains.

Pattison recalls the show file so there’s only minor tweaking from venue to venue, with the exception of the lead singer’s vocals.

“James Allen has chosen to use a low gain mic designed for snare drums in a studio environment, so I have to dial in the gain higher than usual and pick up loads of other things on stage, like the snare drum. I use lots of EQ and compression and then feed it to a subgroup with a graphic and a parametric EQ. I even have an EQ for when he talks between songs because it gets a bit muddy. I am also using a big plate reverb and a stereo delay on his vocals. We have actually been accused of miming because it sounds so much like the album!” he concludes.