Impulse is Novation’s brand new, cutting-edge range of professional USB/MIDI controllers, available in 25-, 49- and 61-key models. Each has an ultra-responsive, semi-weighted keybed with aftertouch, making it feel and play like a real, expressive musical instrument. Impulse controllers have eight rotary encoders, full transport control, a large LCD and 55mm faders, enabling highly expressive performance and unsurpassed control of your music software, with excellent value for money. 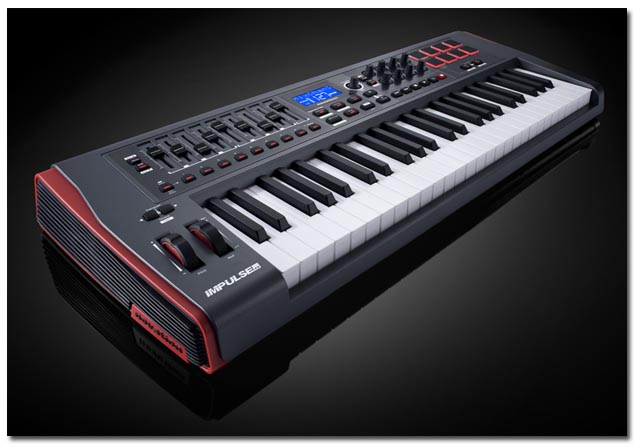 All eight of Impulse’s drum pads are backlit with multi-coloured LEDs, and they operate in different modes, such as following the pattern being played by Impulse’s on-board groovebox-style arpeggiator/step

sequencer. You can change the pattern in real time and engage a beat roll function, to improvise with drum patterns on the fly. In addition to this, the drum pads can be used to trigger clips in Ableton Live’s session view; illuminating yellow if a clip is loaded, green if it is playing and red if it is set to record. Of course, you can add further character to your performance with the pitch and modulation wheels. Impulse is designed to give you complete control of your music-making software. The knobs, faders and buttons put your mixer, instruments and effects at your fingertips, with the convenience of the included Automap control software. Impulse’s large LCD screen shows important information about what you are controlling, as you are touching it, and transport buttons provide direct hardware command over your session and easy navigation around your music software.

As well as a precision keyboard, drums pads and a full control surface, each Impulse controller comes with Novation’s award-winning Automap control software, for fast and simple DAW and plug-in control. Impulse also comes with Ableton Live Lite, Novation’s Bass Station soft synth and a Loopmasters sample pack, giving you all you need to start making music. Impulse controllers are powered via the computer’s USB connection, and there are expression and sustain pedal inputs on the rear panel, as well as a MIDI input and output, so you can use Impulse as part of a larger hardware setup. Novation’s Impulse Range will be shipping in September 2011.