The Endauvour evo is a midi keyboard with something special! The keys have built-in sensors which makes them touch and pressure sensitive. No doubt that this makes things pretty interesting. More information will be revealed soon by the new company.

Discover the evo. Worlds first keyboard with touch sensitive keys. With the help of capacitive touch sensors the evo is able to read your fingers movement on top of a keys surface. Next to pitch and velocity there is now a third layer of polyphonic data input. 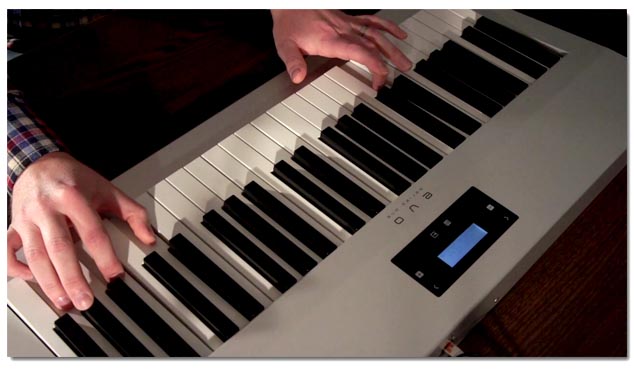 Think of polyphonic control of pitch and expression. Think of having a pitch or mod wheel integrated into every single key. Think of never ever leaving a key just to turn or push some knobs or buttons.

So, it’s a combination of classic keyboard key and modern touch technology. The best of both worlds combined in a single keyboard. But best of all! The characteristical function of a key remains unchanged. The evo still features traditional pressure-sensitive keys. But in addition there are now all the advantages from a touch-sensitive input device in every single key.

So. At first this might sound like the evo is an all new instrument. But it’s nothing more than a traditional master-keyboard… With capacitive touch inside every key.

For more information check out their homepage and feel free to send them an email.