Before the MusikMesse started, Propellerheads decided to invite the press that was already in Frankfurt to visit MusikMesse, to their own little press event. There was some speculation of something mobile, something rack, something, well, read on for more 😉

First was a review of 2011, including some price reductions of Balance (new price 399 dollar or 349 euro) and Essentials (99 dollar or 99 euro). Then it was time for the first new product announcement, Figure. Figure is an iOS application, strongly based on Reason, but it is definitely not a port of Reason for the iPhone family of mobile devices (iPhone, iPod, iPad). Figure makes use of the internals of Reason and offers some of Reason’s major components, but on top of that it offers a user interface that is built for iOS, so it supports touch interaction and is controlled through screens that offer lots of control for the casual music making user. The idea behind developing Figure is to provide a music making app that users can and want to use when there is some time to kill. Like a three minute busride should be enough to program a drum loop. And then the busride back should get a bassline added to this. Looks sweet, sounds pretty good, and respect for Propellerheads that they will offer the Figure-app for only 1 dollar. The Figure-app was submitted last friday at the App-store, so it is expected to become be available any time soon. 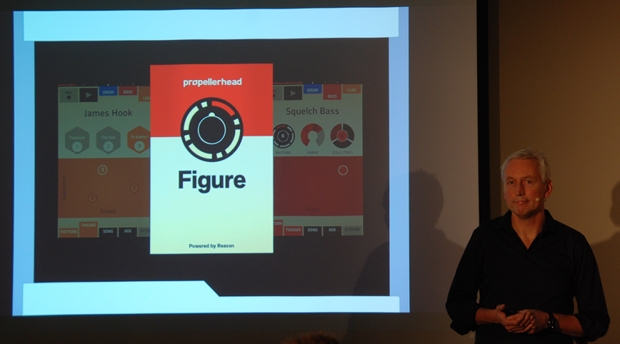 Next up was what we consider the bigger part of the news. Not a finished product yet, but a live technology preview of Rack Extensions, or ‘Re’. This means that there were actually some live demos of both synth engines as well as sound processing components. Cool! Rack Extensions are Propellerheads interpretation of a plugin architecture. When designing Re, the Propellerhead people tried to answer to some fundamental questions, putting the user experience first, and letting technology follow. So they came up some answers, including, but not limited to features like:

This is not just talk, but a live demo was showing some of this stuff actually working with third party plugins. But what’s more, and this is pretty revolutionary, Propellerhead also introduces a solution for distribution and sales. Meaning they are introducing a Rack Extension Marketplace.

This is actually a tricky one.

One one side, this means that as a user you know where to find your stuff, and Propellerheads claim that they keep your account with your own plugins available for eternity. It also means that the only place where you can get your plugins, is from Propellerheads, no means to install stuff outside their control.

On the other hand, as a developer, you must get Propellerhead’s nod to be actually able to offer your own plugins to users. There is no way around this. 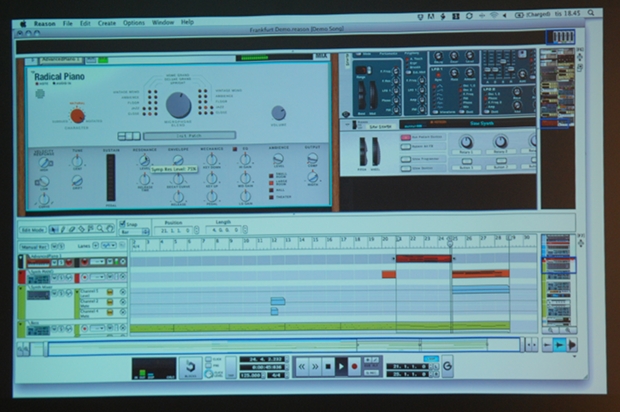 Offering yet another plugin architecture is a brave step to take, and only time will tell whether it will be smart and developer will accept another target platform. One thing that it definitely will do, is offer the user an optional way to expand its Reason experience to new levels that were not possible before. This is very good news to many people who want more!

The Rack Extensions architecture will become available in Reason 6.5 and Essentials 1.5, which are free upgrades scheduled to be released before the summer in Q2. At the moment, there are already a number of companies that will support the ‘Re’ architecture, among which are u-He, Softube, G-Force, Korg, Sonic Charge and Sugarbytes.