Recently we showed you the video of this new effects pedal from Electro-Harmonix. Today we got word that this pedal officially has been released. EHX’s new Superego Synth Engine can capture and hold notes or chords, perform fluid glissandos and create oscillator like synthesizer effects. It enables the player to stack or layer sounds, create infinite sustain, even tweak attack and decay. The Superego’s effects loop also lets a musician insert effects into the wet signal. 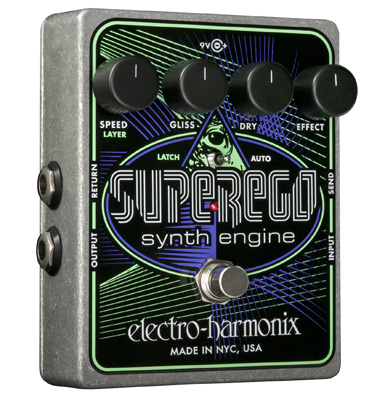 Although quite powerful, the SuperEgo has a simple control layout. The Speed control adjusts the attack and decay rate, creating everything from short to infinitely sustained sounds. It doubles as a level control for layers in Latch mode. The Gliss knob adjusts the glissando or glide speed between notes and chords. The Dry and Effect knobs are level controls.

The one-of-a-kind pedal also features three modes controlled by a mini toggle switch: Auto, Momentary and Latch. In Auto mode, the Superego captures and freezes a note or chord and holds it until the next note or chord is played. In Momentary mode, a note or chord is captured as the footswitch is depressed and released when it is released. Latch mode enables the player to layer or stack sounds.

The new Superego Synth Engine pedal, set for a Mid-May release, is housed in a solid die-cast package, is equipped with a standard 9.6-Volt/DC200mA AC adapter and carries a U.S. list price of $283.60.