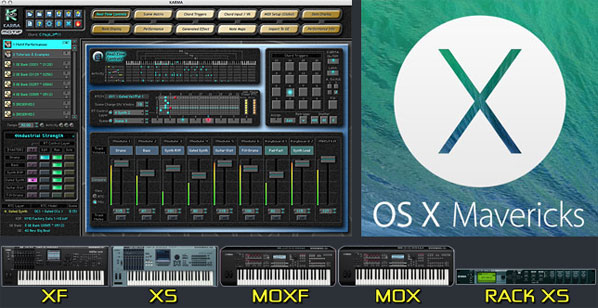 The update brings developer Stephen Kay’s award-winning and patented KARMA algorithmic music technology to a number of Yamaha Motif-based models, giving them extensive new interactive groove generation, arpeggiation and arranger-like capabilities. The software uses the Song/Mixing/Multi Mode of the Motif-based instruments to provide 16 part multi-timbral templates with the kind of fully interactive real-time controlled grooves that only KARMA can produce.

KARMA Motif uses the keyboard’s Song/Multi/Mixing mode, where each of the included KARMA Performances is a complete, 16 part multi-track six-module KARMA algorithmic music groove, with a left hand and right hand zone for controlling KARMA and soloing on top of it, and eight fully voiced and completely different scenes. The keyboard’s arps are also additionally integrated in each Performance as additional elements that can be added via KARMA’s Intelligent Chord Trigger Transposition features. And since you are already in Song Mode, you’re just one step away from recording your KARMA-fied musical performances into the internal sequencer – or you can route the output to any DAW for external sequencing. Furthermore, a KARMA Performance can call up any Voice, Performance, Song, Pattern, or Master slot when loading, so that KARMA can be used in any of the supported model’s modes.

KARMA Motif is available directly from Karma-Lab for US $199. A 13 minute Video Introduction on the Motif XF is available demonstrating many of KARMA’s interactive performance capabilities. More information, including links to documentation, tutorials and user forums, can be found at karma-lab.com/karma-motif.