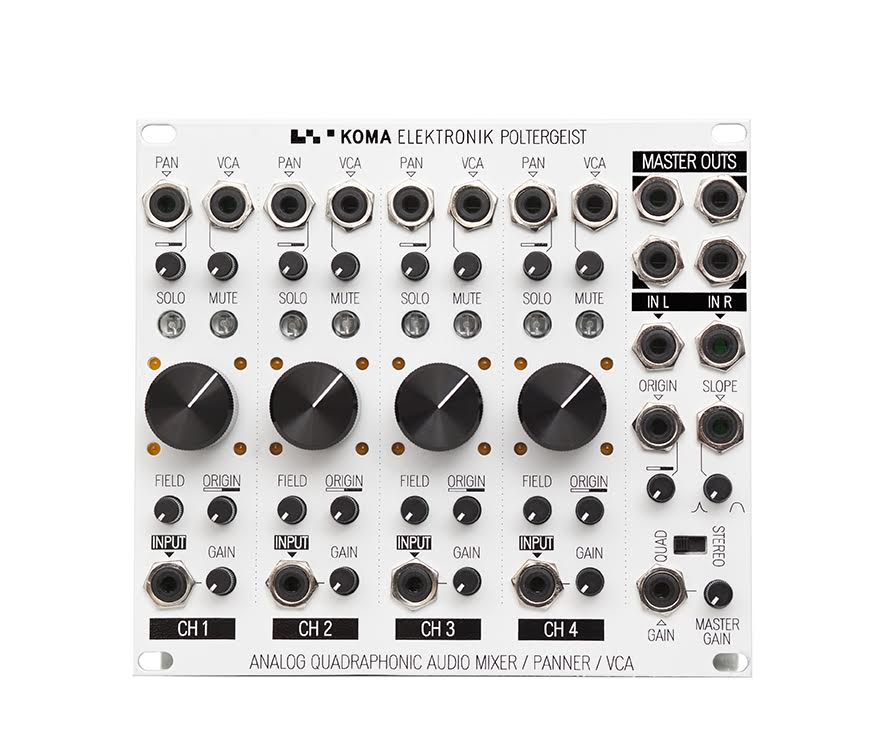 f w
h
fFacebook wTwitter gGoogle+ pPinterest
A bit over a year after its announcement, KOMA Elektronik is happy to announce that the Poltergeist Quadraphonic Audio Mixer for Eurorack systems is in production and has started shipping!

KOMA Elektronik’s new Poltergeist Eurorack module enables users to manipulate up to four audio/CV signals quadraphonically or stereophonically in new and ghostly ways. Previously you would need multiple modules from various manufacturers to achieve something similar to what we perceive as quadraphonic sound. But now with one single module, you can mix and control signals quadraphonically with complete control and beyond with its 21 ins and outs, 48 SSM VCAs and unique hands-on mixing features.

The four individual channels of the Poltergeist each include a VCA with CV input, performance-oriented clickless solo and mute switches that engage upon release for perfect timing, pan with CV input over the entire 360°, a FIELD knob to add an inverted version of the signal to all mixer outputs, an ORIGIN knob to control pan modulation from the Master Origin CV input, and of course an input with Gain control. Spatial animation is easily achieved by adjusting these parameters along with outside CV control from other modulation sources.

With a flick of a switch, the Poltergeist can function as a stereophonic mixer as well. In the master section are 4 mixer outputs dedicated to each quadrant or left and right depending on which mode it is in. There is also an auxiliary stereo input going directly to the summing bus (pre master VCA). Create your own compressor by using another module like an envelope or comparator into the Master Gain CV Input, a half-rectified, inverted CV input where positive CV reduces the Master Gain and negative CV is ignored. At the end there is the Master Gain knob to control overall volume.

Pan position is highly controllable on an individual level for each channel. Slope (also controllable via CV) controls the curve of the pan: on one end the signal remains at one output for a long time then quickly jumps to the next; while on the other end, the signal stays at the output for a shortage before it slowly begins moving to the next. Shift each or all channels’ pan positions from 100% to 0% to -100% with the Master Origin CV input. By adjusting each attenuverter on each channel, complex choreographies are possible.

The Poltergeist measures at 28HP wide. The KOMA team has worked over a year and a half on this entirely new design as this module premiers our patent pending analog method of controlling quadraphony and mixing. The Poltergeist will be available from KOMA Elektronik’s website and at select retailers worldwide from March 15th 2016 for a MRSP of 850 USD