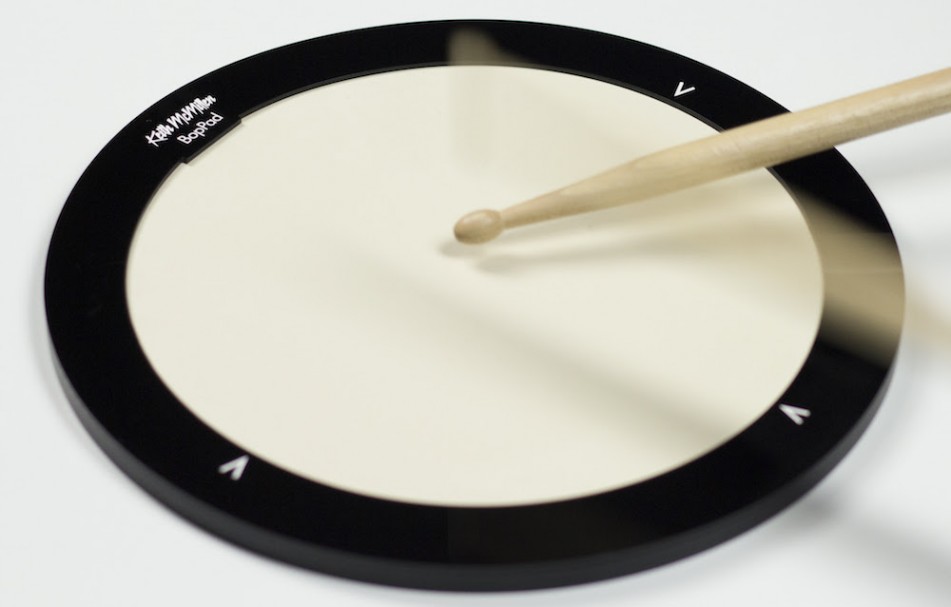 Keith McMillen Instruments is proud to introduce BopPad — broadening the company’s considerable product appeal by beginning to scale up for production of the most advanced electronic drum pad controller ever conceived — courtesy of a Kickstarter campaign kicking off as of August 31, 2016.

As the first product to come out of KMI Labs the R&D (Research and Development) division of Keith McMillen Instruments, BopPad is an expressive electronic drum pad for drummers, percussionists, and producers alike. As such, it advances accurate hit detection via velocity, continuous radius, and pressure sensitivity with a p.d.q. (pretty damn quick) playing surface to die for. Faster than you can shake a stick at? Absolutely — as attested to by its incredible 2.4 millisecond latency! Literally set to be a game changer, BopPad’s advanced architecture allows for an innovative instrument that ‘sees’ every gesture, hit, or tap to truly respond to the nuances of any percussive performance, perfectly measuring strike velocity from the softest hand-drumming actions to the most brutal percussive assault.

According to Keith McMillen Instruments Founder & CEO Keith McMillen, “The BopPad is the ultimate MIDI drum pad controller, providing a thrilling amount of sensitivity, control, and flexibility, whether playing with hands, fingers, sticks, or mallets. It’s great for the beginner looking to unleash their inner groove or seasoned pro demanding the most advanced control surface to take their kit to the next level.”

Speaking of which, the pad itself is splittable into four independently programmable zones — Quadrants in ‘KMI speak‘ — outputting MIDI (Musical Instrument Digital Interface) notes, velocity, bend, pressure, and location CCs (Control Changes). The BopPad Editor software — which will be available as a desktop download and iOS app — allows those Quadrants to be assigned to play up to six simultaneous notes with six expressive timbre maps, meaning that BopPad can not only be played like a traditional drum by triggering a single sound from its entire surface but building out a drum kit by assigning a different sound to each of those Quadrants so that a single BopPad can comfortably handle several simultaneous percussive goals. Get this, though: smoothly varying radial sensing from centre to edge along with continuous pressure response can be mapped to any parameter, allowing for both traditional and experimental playing styles like no other!

“Our instruments are made out of a smart fabric I started developing over eight years ago,” asserts Keith McMillen, bringing musical credence to technology as the great leveller. “This fabric is at the heart of all of our products and we’re constantly refining the process. We’ve been able to get a super-sensitive response and wide dynamic range, making it the perfect sensor for a percussive controller.”

Delving deeper into the technology behind BopPad, Keith McMillen maintains, “One of our most important innovations is the printing of special electronic inks directly onto materials, making the sensor far more resilient and trimming down the instrument’s size and weight. The sensor fabric is covered with a layer of tuned elastomer and housed in a rugged enclosure to make a tour-ready drum pad controller that will withstand a lifetime of heavy performance.”

Priming prototypes of BopPad being field-tested for fine-tuning with professional percussionists and drummers in readiness for scaling up to full production as a perfect percussive controller capable of withstanding a lifetime of heavy performance prompts some serious investment in tooling, materials, and assembly. Again, Keith McMillen Instruments is turning to Kickstarter — the world’s largest funding platform for creative projects — for funding support, having previously completed successful campaigns to help bring to life its innovative QuNEO 3D multi-touch pad controller and QuNEXUS smart sensor keyboard controller. Concluding with some serious words of wisdom, Keith McMillen cuts to the chase: “KMI has two successful Kickstarter campaigns under its collective belt, and we’ve learned a lot of important lessons about timely delivery and how to be successful in our projects; there really is no better way for a small company with a good idea to get the awareness, feedback, and support it needs to bring it to the real world.”

What, then, can Keith McMillen Instruments’ supporters expect from BopPad when brought to the real world in its finalised form? Simply speaking, another music technology innovation that is accessible to everyone. Easy to get started, simply plug and play via USB (Universal Serial Bus) with any mobile device, laptop, or desktop computer. Critically, as a class-compliant MIDI device, BopPad works with all music software. Hardware-wise, Keith McMillen Instruments has helpfully built BopPad to travel. Measuring merely 10 inches (25.4 centimetres) in diameter and weighing in at less than one pound (454 grams), its rugged and portable form factor makes it the perfect percussive partner for on-the-go creativity… coming to stores sometime soon if those previous Kickstarter campaign successes are anything to go by. But, by pledging to back its Kickstarter campaign to the tune of $150 USD (or more), in all likelihood it will be possible to get one sooner at the lowest pricing possible. Pledge today and prepare to play percussion in a way you’ve never played percussion before!