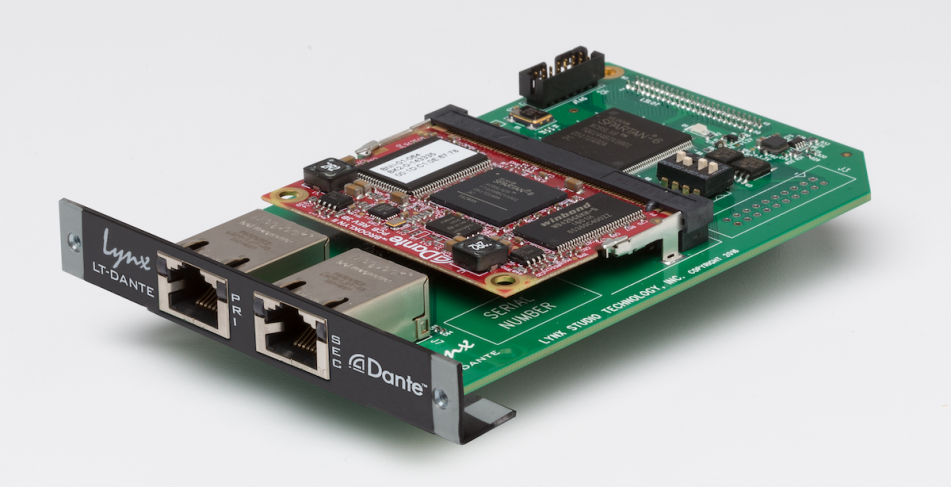 Lynx Studio Technology introduced the LT-DANTE LSlot interface for its Aurora and Hilo converters. The LT-DANTE is a Dante enabled expansion card for audio networking that connects Hilo and Aurora with other Dante-enabled products over Ethernet-based networks.

“As we’ve monitored the growth of audio over IP and Dante in particular, it became clear that we needed to take advantage of Aurora’s and Hilo’s expandability and create a range of Dante enabled Lynx products.” stated Bob Bauman, Lynx CoFounder and Chief Hardware Engineer.

“Not only does this continue to keep Aurora and Hilo in the forefront of audio performance, but it allows these converters to be included in multitudes of Dante installations and applications. What we’ve witnessed in development of these networked products is they simply work, and it’s the very plug-and-play nature of Dante that was so attractive for us as a manufacturer.”

At the same time that the LT-DANTE is released, Lynx will introduce several converter models using this interface. These include the Hilo-DT, Aurora 8-DT and Aurora 16-DT models. In addition, any existing Hilo or Aurora owner can implement an LT-DANTE to their converter with the latest firmware.

“Adding Dante’s audio over IP capability to these outstanding converters allows entire new segments of the Pro Audio industry to benefit from Aurora’s and Hilo’s pristine audio and rock-solid reliability.  Their reputation of best-in-class performance and value are further enhanced by the introduction of Dante connectivity.” explained Lynx Co-Founder and Chief Software Engineer David A. Hoatson.

“By adding Dante, it puts Lynx firmly in the live sound and commercial integration segments. The more demanding you are as an integrator or audio engineer, the better Lynx is positioned as the partner for them.”