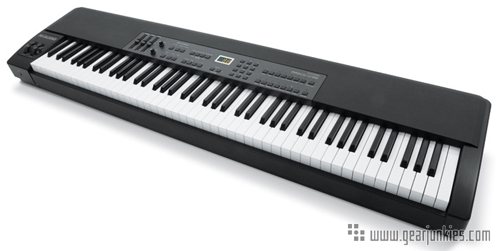 The primary mandate in designing the ProKeys 88 piano was creating an over-the-top piano experience combined with affordability. Most digital stage pianos cram all their sounds–sometimes 128 or more–into as little as 16MB of ROM. M-Audio chose to design the ProKeys 88 with a generous 64MB to do much better justice to 14 sounds that are the bread and butter for many keyboardists. The premium stereo grand piano samples of a Yamaha C7 alone are 30MB–more than some units’ total memory for all sounds. And where most digital stage pianos use only one or two samples per note to respond to a full range of touch, the ProKeys 88 stereo grand employs three velocity layers with cross-fading for dynamic response.

The ProKeys 88 also delivers all the staple keyboard sounds needed by many musicians. Its flagship stereo grand is supplemented by a brighter grand, designed to really cut through in popular music. The ProKeys 88 has electric pianos covered too, including both bright and warm classic Yamaha DX7s, a sweet Fender Rhodes and a vintage Wurlitzer. Users also get two Hammond B3 settings and one Hohner Clavinet. Acoustic and electric basses provide the option of layering a ride cymbal for jazz tunes. Vibes, ensemble strings and an inspiring warm, lush synth pad round out a great sonic palette for the gigging keyboardist.

The ProKeys 88 piano’s full-range 88-key clavier features weighted hammer action to deliver an authentic playing experience in conjunction with 64-voice polyphony. It features three velocity curves tailored to different touches, as well as a fixed velocity for synth work. The keyboard also features split and layer capabilities and users can even have a split and layer simultaneously for a total of three sounds at once. Dedicated volume sliders are provided for master, layer and split components. Adding to the ProKeys 88 piano’s playability and realism is a sostenuto pedal that complements the standard sustain pedal.

Where most digital stage pianos offer little more in the way of external communication than a MIDI jack, the ProKeys 88 incorporates a full USB MIDI interface that communicates with a PC or Mac computer via a single, simple USB connection–perfect for recording with virtually all MIDI sequencer software on the market. (The instrument features class compliancy with Windows XP and Mac OS X platforms without installation of additional drivers.) Users can even control their sequencers remotely via front-panel Start, Stop and Tempo buttons. MIDI In and Out jacks allow full communication with all standard MIDI gear as well. The ProKeys 88 is also General MIDI-compliant.

The user interface of the ProKeys 88 features dedicated buttons for the 14 instruments, plus a button to add a ride cymbal to the acoustic and electric basses when in split mode. There’s also a dedicated button that cancels any splits and/or layers and returns the user to the stereo grand piano sound. There’s also a 12-key data entry pad in conjunction with a 3-digit LED display for edits.