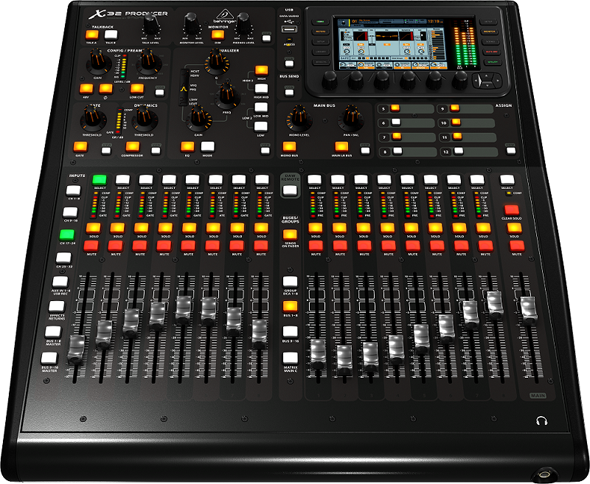 The most compact of the X32 family of consoles, the X32 PRODUCER offers all the features that critical musicians and engineers will love: motorized faders, on-board stereo FX racks with studio-grade reverbs, compressors, delays, EQs and more. The PRODUCER also lightens the load by alleviating the need to carry expensive and space-consuming outboard signal processing gear. Inputs and Outputs can be expanded via AES50 ports on the console that permit the easy addition of up to six optional S16 digital stage boxes, for an additional 16 remote mic preamps and 8 XLR outputs per device. Sophisticated routing is made simple through the PRODUCER’s onboard color TFT screen.

MUSIC Group’s X32 Product Manager Jan Duwe said, “Our new X32 PRODUCER console puts full-scale digital recording and live sound mixing within the grasp of musicians and engineers who use their mixers wherever their work takes them – both in the studio or on the road. Packed with incredible processing power, MIDAS-designed preamps and all the FX you could ask for, the PRODUCER lives up to its name in every way. The included recording software rounds out a complete live sound and studio recording solution.”

The BEHRINGER X32 PRODUCER is available through authorized dealers and online retailers at a MAP of $1,999.99 USD, and is covered by MUSIC Group’s 3-Year Limited Warranty Program.