FabFilter announces the release of FabFilter One in the VST plug-in format for Mac OS X,
in the addition to the existing Audio Units version. This makes it
possible to use FabFilter One in VST-only hosts on OS X, such as
Cubase or Tracktion. 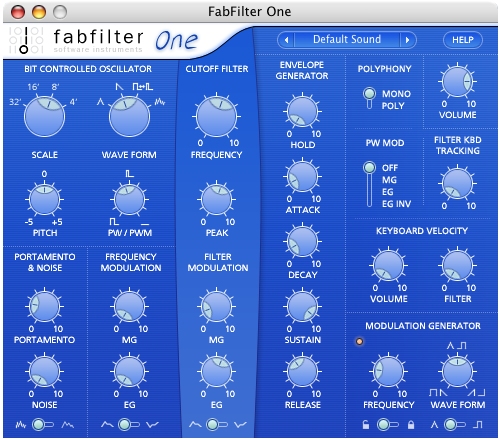 Originally released in March 2004, FabFilter One focuses on the best
possible sound and filter quality. Our new design approach results in
a pure and solid-sounding oscillator and a unique self-resonating
cut-off filter that has been tuned carefully to achieve the character
and warmth of a classic analog synthesizer. FabFilter One’s filter
sounds raw but never cheap or ‘digital’, even at full resonance.

FabFilter is currently finishing its next product, FabFilter Volcano,
an extensive filter effect plug-in building on the filter technology
developed for FabFilter One. The release is planned for Spring 2005.