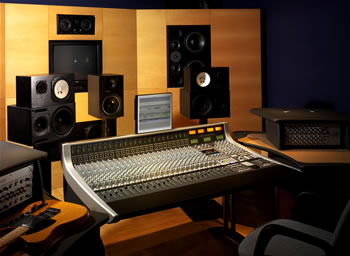 Since its introduction just two years ago, the original AWS 900 has quickly established itself as a unique combination of a world-class analogue console and sophisticated DAW controller. Over 150 AWS 900 Analogue Workstation Systems have been sold.

AWS 900+ builds on the successful original formula by adding tighter integration with more popular DAW platforms, enhancements to the displays and meters, and a sleek ‘platinum’ styling. Using the new control protocols, plug-ins and virtual instruments can now be controlled from the D-Pots and the faders, a hotly requested feature from many workstation users. An enhanced display allows up to 6 character labels for track/channel names and the console also now features workstation Master Fader support.

“The original, hugely successful AWS 900 addressed the needs of those who wanted to work primarily with Pro Tools and also benefit from SSL’s analogue sound and control surface ergonomics,” says Niall Feldman, Director of Product Marketing. “We have had a lot of interest in the AWS 900 from users of a variety of other workstations. As a result of this interest, the AWS 900+ delivers tighter integration and greater control of all of the most popular workstations.”

The AWS 900+ is still the only console that provides the dual benefits of a fully featured SuperAnalogue™ signal path coupled with a comprehensive DAW controller. Key features include SSL’s legendary SuperAnalogue™ mic pre’s and signal processing; full monitoring up to 5.1-channel surround sound; direct control of DAW recording, editing and mixing functions; and flexible signal routing.