Thanks to its flexibility, Focusrite’s RedNet audio I/O technology is being implemented in a diverse range of applications. From single-unit laptop recording setups to multi-room studio environments, RedNet is proving to be a popular audio interface system. One of the highest-profile implementations of RedNet to date is the front-of-house rig for The Killers‘ world tour, where a RedNet 1 eight channel A-D/D-A, and RedNet 4 eight-channel mic preamp perform a number of duties for Systems Engineer Philip Reynolds. He made the decision to use RedNet in order to maintain the audio within the digital domain — A-D conversion takes place side-stage as soon as the mics plug into the stagebox — for as long as possible before conversion to analogue. It’s this, says Philip, that keeps the audio quality world-class. 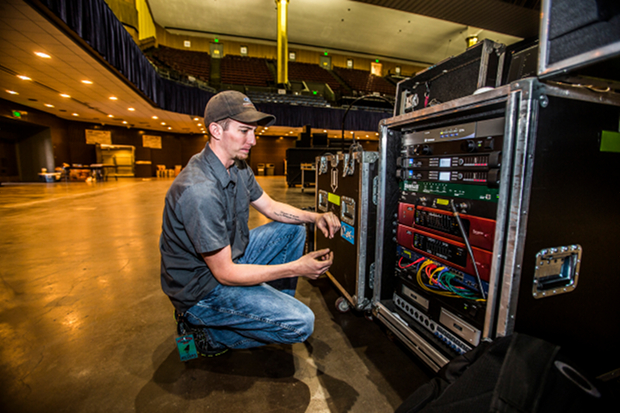 His key responsibility is to set up the tour’s state-of-the-art sound system to perform as well as possible, and, because the venue changes on an almost daily basis, this is no mean feat. In order to do this, he uses audio analysis software coupled with a reference mic, to match the sound system response as closely as possible to the output of the front-of-house desk. RedNet handles all his inputs and outputs to facilitate that process. RedNet 1 plays a crucial role, routing audio to and from his test system, but also to the FOH desk for house music playout and the drones that are used during the show’s encore. This material comes from a pair of Mac Minis, one primary and one backup, which all connect to the RedNet network using the Dante Virtual Soundcard (DVS) driver. RedNet also handles the press and video feeds, as well as any venue needs, such as the hearing assist system for the hard of hearing.

For his test rig, Philip was amazed by the RedNet 4‘s preamp performance, having previously used the on-board preamps in a conventional Firewire audio interface. “I was blown away. The RedNet 4’s preamp is flat, and the phase coherence is perfect.” Having this accuracy is of utmost importance for Philip, as his ability to make fine tweaks to the loudspeakers relies on the analysis software’s precision.

Because Philip uses his own gear on tour — rather than rental equipment — the RedNet system represents a significant personal investment. But the fact that he chose to use RedNet over other Dante-enabled gear reinforces RedNet’s sound quality prowess. “Because it’s mine, I know it works and that I’m going to have it where I go. RedNet does everything I want it to do, and the expandability is endless with this setup. I rely on my system 100%, and it just works.” Over time, Philip intends to expand his RedNet system with an additional RedNet 1 and a RedNet 3 digital I/O, the latter of which will enable him to drive the front-of-house PA from the RedNet network. “RedNet units have allowed me to design a system to bring a fully digital system on the front end. With the RedNet 3 providing primary digital connection and RedNet 1 acting as my analogue backup, we can bring the latency down and keep the quality of audio the same, which has been a goal of mine for the last year.”

To learn more about RedNet and other new installations, head to www.focusrite.com/rednet.