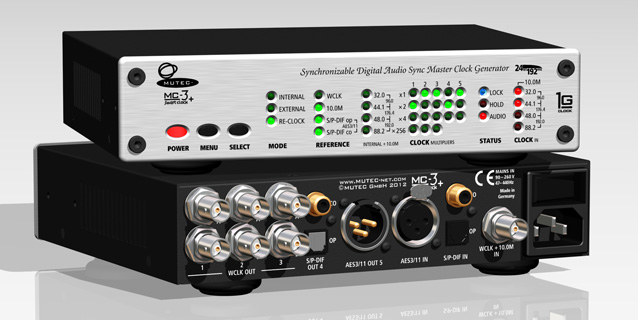 The device is developed to significantly improve the audiophile quality of connected digital audio devices in two ways: At first by clocking devices with ultra-low-jitter Word Clock signals and secondly by aggressively re-clocking incoming digital audio signals. This ability is based on the used proprietary 1G-Clock technology, newly invented by MUTEC, which provides clock signals of lowest jitter possible. As a result, the re-clocked digital audio material is of unparalleled richness of details and spatiality.

Also working as a clock distributor and unlike other products, the MC-3+ effectively regenerates incoming clock signals to higher purity as the signal source. Thus, the MC-3+ enables to improve already existing clock systems and helps to raise the standard of sound reproduction in every studio environment.

Additionally, the MC-3+ Smart Clock locks to so-called atomic clocks or GPS receivers to raise its timing accuracy to the highest possible level. For use during live events or in mobile trucks, the MC-3+ features an anytime fail-safe clock generation in every operation mode. Entering the hold-over mode and re-synchronization of returning clock references is carried out that smoothly that live recordings surely will not affected.

The new MUTEC MC-3+ Smart Clock and its unique 1G-Clock add with the most aggressive jitter reduction a significant improvement in sound to any studio set-up, while ensuring flawless synchronization of connected devices at any time!