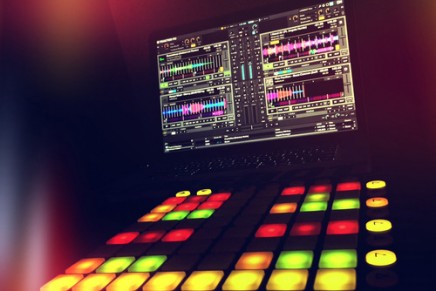 Always interested in DJ’ing but don’t want to spend a lot of money? Well maybe Lamebot’s method is for you an alternative then. He created a DJ setup with Native Instruments Traktor DJ Software, a Novation Launchpad and a Audio 2 soundcard. All new and all bought for around 250 dollars!

The video below is a great live remix of Skrillex and Daft Punk by Conte. We have posted these kind of videos earlier but Jack takes it a step further by adding some great visual FX. By placing the Launchpad ontop of the TV screen he shows some skilled timing and programming. Well, just watch. Only thing we can say that’s awesome!

The Novation Launchpad is an easy to use app for iPad that will have you making beats and music instantly. It comes with eight ready-to-perform sessions that span different musical genres. You can re-combine the loops and sounds included in these sessions within the multi-colour Launchpad grid to make and remix your own music. The built-in time stretching always keeps you locked into the beat so your loops don’t go out of time.

We have posted videos by this guy from Australia before. M4Sonic shows incredible skills when it comes to using the Novation Launchpad. Or sometimes even two launchpads!

Lauflicht have announced that a new version of the step sequencer plugin is available. The greatest new features are the multiple Novation Launchpads support and the pattern load and mix mode.

Automap 4.1 is here, bringing the brand new, full-featured version of Automap control software to all Novation controllers, including the flagship SL MkII. Automap is free software that comes with all Novation controllers. It gives you instant access to your DAW and plug-ins so you can get hands-on control of your music software. It features a software edit page that graphically shows what is assigned to which knob, fader or button on the hardware. Automap 4 has a re-designed GUI and now features a notification system that pops up in the corner of your monitor to tell you what you are controlling when you move a knob, slider or button.

The video below is from Madeon, a 17 year old DJ/producer from France. He uses the Novation controller to make a live mash-up with numerous tracks (check out this Youtube description for the complete tracklist). The Launchpad is purpose built for triggering and manipulating clips in Live, it also offers a totally new way of controlling Ableton Live’s mixer. Launchpad’s buttons can be used to sketch out beats with drum racks, and they can be assigned to other functions in Live using Ableton’s ‘Learn’ mode.

Novation just published this cool video of Novation’s resident Controllerist jamming on an UltraNova and three Launchpads with Ableton Live.

Kenny Larkin (also known as Dark Comedy) is an American techno producer from Detroit. In this NovationTV video below he talks about how Launchpad forms the heart of his Ableton Live setup on stage and in the studio. 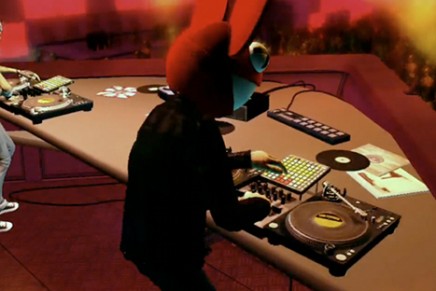 Activision’s DJ Hero computer game was a big hit when it was launched in 2009. It provided gamplay like that of Guitar Hero, but for the wannabe DJ as opposed to the brooding rockstar. This month sees the release of DJ Hero 2, which is packed with lots of exciting new features to keep players on their toes. One of the new features in the game is the inclusion of Novation’s Launchpad in the on-screen gameplay.

Jointly designed by Ableton and Novation, Launchpad places Ableton Live at your fingertips. Whether you’re a DJ, performing musician or studio producer, Launchpad gives you all you need to truly ‘play’ Live. Launchpad is ultra-portable. It is USB bus powered (no need for power sockets), and weights in at just 717gms (one third the weight of a macbook!). With a multi-colour 64-button grid and dedicated scene launch buttons, Launchpad is purpose built for triggering and manipulating clips in Live, it also offers a totally new way of controlling Ableton Live’s mixer.

On Wednesday, November 4, 2009, at the Low End Theory Club in Los Angeles, top beat-makers gathered to perform live with Ableton Live and compete for special prizes from Puma. The evening was a huge success, this movie captures the vibe for those that couldn’t be there.

From humble beginnings as a party DJ in downtown New York, Paul D. Miller (a.k.a. DJ Spooky) is today a formidable force in hip hop. But he’s also an acclaimed multimedia artist who’s written on the subject of the history of hip hop and the aesthetics and art of the genre, and has criss-crossed the globe on the search for art and music. His latest Album, The Secret Song, is a fusion of hip hop, dub, rock, house and breakbeat, with snippets of the numerous genres moulded together to form what reviewers have said “may be the only concept recording of the 21st century that can be considered crucial listening”.

Novation is very proud to announce that the Launchpad, hands-on interactive controller for Ableton Live, is now shipping and widely available in stores and online. Launchpad is a compact controller unlike any other, which is designed to give electronic music makers of today the most interactive experience possible in Ableton Live. It communicates bi-directionally with the software to give users real-time session feedback: now you really can Play Live.