djDecks is a computer mixing program for both beginning and professional djs. Mix your mp3, ogg, wma and wav files easily on any configuration. It took a bit longer than expected, but it’s finally here. This version adds initial support for the EKS XP10 controller, adds new looping functionality (halve/double loop length, move loops) and works perfectly with MsPinky timecoded records again. The tag cache system has also been improved making browsing faster. Various bugs have been fixed, and some performance improvements have been made for ASIO modes. 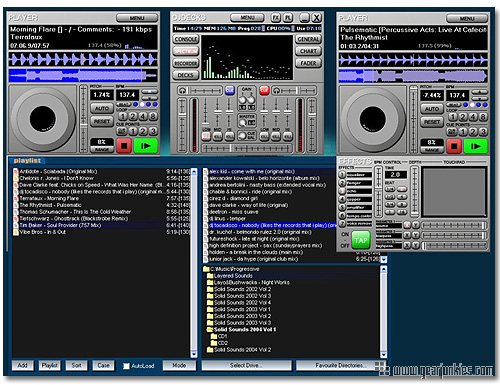 The next release will focus more on VST effect functionality, and will improve DirectSound mode to bring it closer to ASIO mode in terms of functionality and sound quality.

Change log for version 0.70:
-Improved: MIDI Output Clock is more accurate now
-Improved: Track Loading in ASIO mode is more stable by using a separate loading thread
-Improved: Software RIAA pre-amp for unamplified turntable inputs.
-Improved: BPM Detection is slightly more accurate
-Improved: When using Hercules DJ Console slider for pitch, rotary knob will change gain
-Improved: Tag Cache system re-coded for faster tag loading
-Improved: Loading djDecks should be slightly faster
-Added: Keyboard shortcut commands (‘effect_flanger_onoff’, ‘midiclock_sendstart’, ‘midiclock_sendstop’, ‘ud_volume_cut’, ‘fx_vst_onoff’)
-Added: Create loops with tempo depending on other deck. Use right-click on the tap button, or on the numbered button in the ‘loop’ effect window to use.
-Added: A VST effect can now be applied to the master output (right-click on the menu button to open the master vst effect menu)
-Added: Various new skinning objects and drawtypes.
-Added: Add a song that has been loaded to the playlist by dragging the time indication
-Added: On the loop effect panel, you can now halve and double the loop’s length
-Added: ASIO Control Panel can now be opened from within djDecks
-Added: Visual warning when track is almost finished
-Added: Tracks that have been played will get a blue icon in the directory browser when that directory is refreshed
-Added: Initial support for EKS XP10 controller
-Fixed: Streaming ASIO bugs
-Fixed: Problem with third deck not being refreshed correctly
-Fixed: Some ID3v2 tag writing problems
-Fixed: MsPinky records are working correctly now after an update from the SDK
-Fixed: Some locale bugs