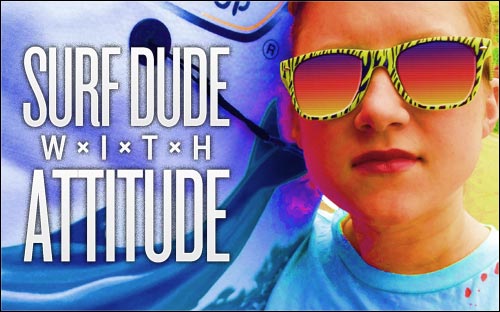 How are you instruments set up when you play live?
For my live set up, I use the Monomachine SFX-6 for drum sounds and two or three additional synth lines. The Monomachine sequences a MIDI-modded Korg Monotron and a Korg Microsampler for ocean sounds. I also use the Monomachine keyboard as a controller for the Creamware Prodyssey.

Does your live rig consist of the same instruments you use when composing songs?
Yes, this is my first solo attempt at creating music. I’ve been producing electronic music with John Ludwig, as J+J+J, since 2002. My Surf Dude with Attitude set came together as part of a friend’s monthly solo electronic performance night in Chicago. The instrumentation is a lot more stripped down compared to J+J+J. The J+J+J live set up consists of a Machinedrum SPS-1UW, a Monomachine SFX-60 and SFX-6 as well as the Creamware Prodyssey and Korg Microsampler, all sequenced by a MPC-1000. The Monomachine gave me the perfect palette to create the Surf Dude with Attitude set and also gave me the opportunity to go back to sequencing within the Monomachine, allowing me to take the music in a different direction thanks to Song Mode and Parameter Locks.

Your lyrics are centred around surfing, how come? Is your stage name a homage to the TV series California Dreams?
When I was asked me to put together a solo set, I initially wanted to play an electronic version of upbeat beach music, like electronic surf punk. The winter drained all my energy and my set was in April, so I was motivated by thoughts of the beach and summer and boogie boarding. As I was producing the music, it just took on it’s own identity. I wanted the lyrics to be honest, so instead of writing a song about surfing some big waves, I wrote a song about being too out of shape to surf. I watched a lot of California Dreams as a kid, so the stage name is definitely an homage to the TV series. I also have a fascination with sharks, which mostly stems from watching many years of Discovery Channel’s Shark Week.

Are you working on any release?
I didn’t think that I would commit the songs to a recording because I produced them to exist for the solo set only. However, the response has been great just from the YouTube videos I’ve posted of the live show. Making these songs was very enjoyable, so at the very least, I plan on releasing an EP of the five songs I prepared for the live set… I’m thinking of a blue and white colored vinyl to look like waves spinning around on your turntable.

Check out videos of Surf Dude With Attitude and J+J+J on YouTube. Official J+J+J site: www.jplusjplusj.com